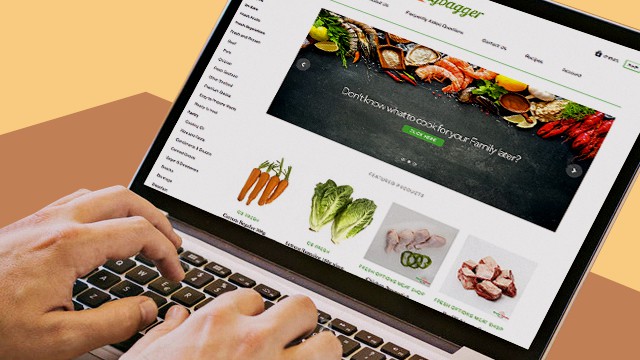 I needed an email alert to know when a new shopper would became available on the groceries website.

During the pandemic, Supermercato24 was my favorite food delivery service, it offered to bring the groceries at your home, managing the shoppers that go to the supermarket.

In these times of lock-down, I usually go shopping with my bike, because ordering platforms are totally overbooked. As everyone is forced to stay at home, shoppers remain available only for a few minutes before being all reserved. It’s hard to find the right spot if you want your food delivered in a few hours or even the next day.

I thought of hiring a programmer on Upwork, to create a web based script that would help me with this problem. The script needed to log on the website for me and send an alert via email when new shoppers would be available again. In that way I should be able to rush on the website and place an order.

“Upwork is a global freelancing platform where businesses and independent professionals connect and collaborate remotely” (wikipedia).

So I placed the title of the job posting, trying to be very specific, as the more precise you are, the least problems of understanding are going to show up later.

Than I set up the required skills, in my case a programmer able to do automation.

Finally I published the job posting. And that’s when the fun part started: in minutes I received a job application from Ait Doukali Z., a programmer from Morocco.

It’s been really a pleasure working with him, as he’s an expert programmer and quickly created a program in python on his computer, sending the first test emails. Later he placed it on a Google Cloud virtual machine. The next day it needed only some minor changes, and today I was receiving emails as expected.

So, I discovered two things:

One, that if you check for new shoppers in the evening, you will find a sufficient number of shoppers, but shipments will be available in the next 3 or 4 days.

Two: if you want the shopper available for the next few hours you need a bot like this to catch it, because new shoppers show up in a totally unpredictable way.

Now I can have a shopper in 3 hours at my door.

In 2015 I worked on Upwork as 3D model maker and industrial designer and it’s been a really intense and rewarding experience.

I felt empowered as my clients were piling up at a fast pace; I was plenty of good ratings from my clients. Corporate employees in need of an extra hand for a project, more often makers searching for a personalized service to realize their projects, sometimes startups with a new product, or inventors with an idea that needed to be designed, 3D modeled, prototyped to show it to potential clients.

The so called “gig economy” is one of those phenomena ignited by the internet where the tension between low prices for consumers and fair job conditions for the workers started to heat up a few years ago; now you can’t feel at ease without taking the side of the liberal economy OR the workers rights, but for now I wanted to focus on creating a cloud based script in two days. I posted a fixed price job at 30€ for the whole project, and I received an offer probably because the worker was at the beginning of its career on the website, he needed to build his reputation. Probably in the future, as the worked hours will be higher and the ratings too, he will only accept payments by the hour, realistically at 30€/hour. I placed a tip of 20€, feeling a bit guilty.

An internet jobs marketplace is a great resource for freelancers. During my experience as a 3D model maker and designer in Italy I often struggled with a system where new contractors are found by word of mouth. Companies can’t trust a freelancer if it’s not recommended, or if they can’t count on a history of built trust. But in a marketplace you can trust the rating of a worker, in a similar way to the rating you trust for a product on Amazon.

I just suggested that people can be treated as goods, entering in the muddy waters of mercification of the workers, but I still see a jobs marketplace as powerful tool for a freelancer.

And I didn’t yet mentioned the unique possibility offered on Upwork, to have automatically enforced contracts and payments, something you can only dream of if you are a freelancer in Italy (think of 60 days payment terms, if only the company is still alive by that time).

The freelancers rating system is a central part of the trust that clients can put in a freelancer and indispensable to expect the desired outcome.

For a freelancer on a marketplace, rating is the most important presentation, even more important than the price they offer.

For small companies and private clients, this service can unlock the potential of a global market of really skilled workers that offer specialized services at a fraction of the price that a large studio can offer, unlocking the possibilities for great ideas to be realized.